Last weekend we got together for my granddaughter Sylvia’s 4th birthday, which is today.  Happy Birthday, Sylvia!   Sylvia loves dinosaurs and wanted a dinosaur party, though she hesitated somewhat because, according to her, dinosaurs could be mean.  We decided pink and purple dinosaurs would make them a little more gentle.   This set was shared on the Cricut Circle Blog a couple of months ago, as I started to create these items for her party then.   Since that time I did add a couple of teal tones for the boys at the party.  Unfortunately, I forgot to put the memory card back in my camera before I headed out to the party and didn't get any new pictures.

I made her a small birthday card, but this could easily be used as invitations, too.

I wanted the party hats to have that typical dinosaur ridge down the back of them so I created one in Cricut Craft Room by welding triangles and a long rectangle together and added them to the hat before assembling.

I made up some Thank You boxes that are easily carried by the children and plenty big enough for their hands to dig around in looking through their loot!

The strip under the rawr says {that’s Dinosaur for thanks for coming} .  Rawr is the only word I know in dinosaur, so for this party it’s going to mean whatever and everything we want.  RAWR!!

On all of my dinosaurs I’ve glittered the spots on their backs.  On some I just used glitter glue and on the others I used pop dots and pressed one side into glitter and adhered them directly to the dinosaur already glittered.  Really cute!

Up to my Styrofoam neck in face masks!    No need to wear the same one at work every day!    What a crazy time we're living in righ... 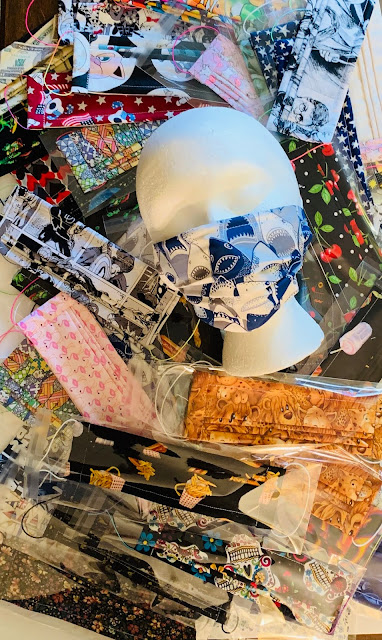 Some of my items